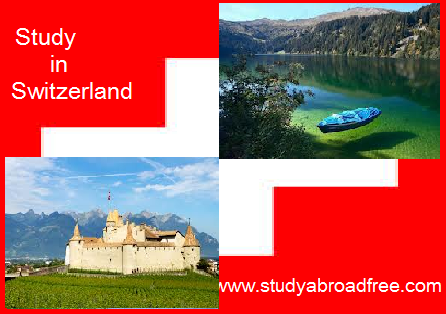 Study in Switzerland for a Better Future!Switzerland is located in Europe. The system of education in the country is of high quality and accessible to local and foreign students. The constitution in Swiss sets out that primary school education is mandatory for every child. The education is also free in public school.

The system accommodates students of below 15 years to the university level. There is vast information about the education centre’s for the students.

The pupils specialize according to their talents and career paths after the primary school. After attending secondary school, the federal matura grants access to the University of Choice. The other students who do not qualify for the university opt for practical and theoretical education.

Study in Switzerland without IELTS 2020

The university system in Switzerland has about 12 Higher education universities and colleges. There are those that are located in the region speaking German. They include; Bern, Basle, Zurich and Saint-Gallen, the Haute Ecole universities, and Ecole Polytechnique. The instructions in these universities are given in German. The French speaking universities include Fribourg, Geneva, Neuchatel, Ecole Polytechnique and Lausanne. The Universita della Svizzere in Lugano is the only Italian speaking university. There are also other higher education institutions instructed in English and French.

These universities in Switzerland offer different courses which are in two semesters per academic year. The length of the study depends on the course. The Swiss degrees are the PhD, Diplomas and the Licentiate.

The admission to the Swiss universities require valid certificate Swiss maturity equivalent to foreign upper secondary leaving certificate. However, each university makes its choice on the qualification of the students to be admitted.

Study in Switzerland with Pride

Swiss has many scholars who are awarded with Nobel prizes mostly in sciences.  Switzerland has the world’s largest physics laboratory which has contributed to the well performance in sciences.  The country is ranked 8th in mathematics and 25th in science overall in the world. The world economic global competitive forum ranked Switzerland the first under the 54th pillar of higher education and training among those surveyed (Economic, 2011). SO, you can Study in Switzerland for free with complete confidence!